KOLKATA, WEST BENGAL: Kiddepore Sporting Club get knocked out in the group stage with their 2nd loss. Yet again Kidderpore has been very vulnerable in the first few minutes of the game. This time it was Kalighat MS taking advantage of it at the 9th minute as Rahul Kumar Paswan hit home and gave his side an early lead. Following this goal, Kidderpore picked themselves up and brought the game to Kalighat. Kidderpore changed their defensive policies and started attacking and also defending in a pack. This kept Kalighat from scoring any more goals in the first half. At the 27th minute, Kidderpore got a chance to get past  Kalighat defense with the help of a brilliant finish by Saikat Sarkar. This gave a Kidderpore a lot of confidence and the game took a turn and was an electrifying match up.

The second half started from where both the teams left off but Kalighat was quick to change the complexion of the game when Supriyo Ghosh found the back of the net at the 51st minute and gave Kalighat the lead. This gave Kalighat a good boost and they went on to score their third when Tuhin Sarkar scored a cool and calm goal at the 74th minute. Kidderpore trailed by 3-1 and their game sent out a message that they had already given up and they just wanted to defend what they have. This soon changed as Gourav Samanta came out of nowhere to score the 4th of the game at the 90th minute and made sure they sent a strong signal to the other teams in the tournament that they are a side to look out for.

The match ended 4-1 in favour of Kalighat MS and Supriyo Ghosh was named the Man Of the Match. When asked about his experience he said, “I feel very good to get the award but the whole team played well. What happened in this match is past and we will focus on what is there for us in the next match.”

Kalighat MS is set to face Mohammedan Sporting Club on 12th December, 2020 at the Kalyani Stadium at 1:30pm. 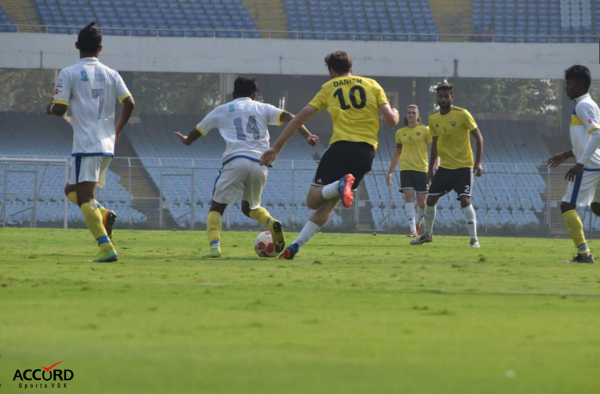